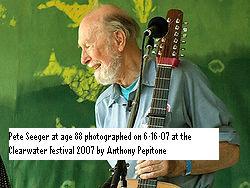 I have to admit I was rather tired of all the celebrities at the Inauguration. The real hero in attendance was Pete Seeger, who faded into the background. It probably didn’t bother him for he has never been one to seek the limelight. Good for Bruce Springsteen, though, who gave Pete the introduction he deserved. Who among the celebrities has fought for so long and so hard for social justice, civil rights, the environment? Who among the celebrities has turned up at the curb weekly with a protest sign since the very beginning of the Iraq war? Who among the celebrities suffered from and fought successfully against the blacklisting campaigns of the 1950’s? While I thought I was the only one that noticed, I see that Wikipedia, also, commented on the fact that Pete and the group sang the radical verse about private property in This Land is Your Land, typically deleted from school book versions of the song. Who among the celebrities will be as politically active so close to their 90th birthday? Pete keeps on keepin’. He’s one elder that I find truly inspiring!

This entry was posted on Wednesday, January 21st, 2009 at 10:05 pm and is filed under Aging and the Economy. You can follow any responses to this entry through the RSS 2.0 feed. You can leave a response, or trackback from your own site.